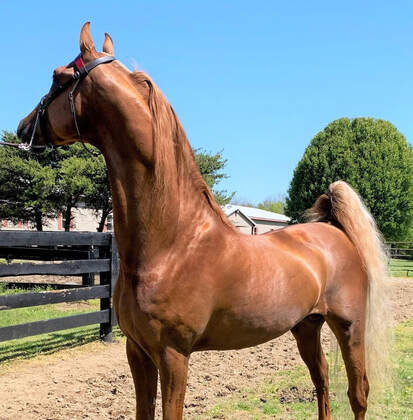 ​New to the All American Cup this year, is World Champion Say Amen, sired by multi-World Champion producing sire, World Champion Bob Bobaloo (also an All American Cup stallion).
Say Amen’s papers are filled with champion producers…WC Belle Reve’s Renaissance Man, Catalyst, WGC CH Foxfire’s Prophet, RWC I’m A New Yorker, WC Attache, WGC CH Valley View Supreme, Periaptor, Supreme Sultan, Mr. Magic Man, Hall of Fame Broodmares…RWCC The Light O’ Love, My Prom Night, RWC All Roses.  He is also a full brother to World Champion Dazzlelight, as well as Heart O’ Love, who is the dam of World Champion Electric Moon.  “JR” is one of the most naturally talented and gifted 5-gaited horses you will find.  He has an amazing attitude, personality, quality and LOVES to work.  He possesses a beautiful head, small ears and short back, all of which he is passing along to his foals (along with his talent).  To say we are excited for this young stallion’s future offspring is an understatement.  Say Amen is an amazing outcross!
Owned by: A.E. Nelson